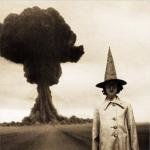 Baz's Mod v1.5 (Released September 15, 2011)     Short Description: This is a large scale overhaul modification for Rock Raiders (for PC) by me. This mod has been under d

The link is to the now old wiki, you can see it here: http://www.rockraidersunited.com/oldwiki/index.php?title=Baz's_Mod_Levels

Winrar can open ZIP files so maybe he does mean Winrar. But maybe try a different program to unpack it... I'm not sure what would be causing the error.